heres a funny thing you can do against iron guardian

there are a few bugs. when u shoot two knives too fast, or when u throw two at a time, one doesnt cause any damage (also, a sugestion. there could be a little thing in the corner showing wich powers u have). but the game is rly awesome, spend a lot of time in it!

So uhm, I had +1 knife and piercing knives, when I made it to the Iron guardian I hit it but then my game began to lag out, or just the screen started shaking and wouldnt stop.

Ok so I made it back here and it is just creating infinite particles which lags me a lot.

Yeah, there's some bugs on this (jam) version. Gonna make a HUGE update on the upcoming weeks.

anyone else fullscreen not work?

I tried it out in this 10 minute arcade hour video (but i had so much fun i had to go longer than 10 mins!)

beat this in an hour, good game.

what does it say the cost of having the sword is? every time I get to that part of the cut scene, my screen glitches out or somthin, and I can't read it.

Loved this so much! I got to the boss and it seemed to bug out - i was doing damage to it and it was exploding eternally. Not sure what caused this, but yeah. Otherwise, so great

cool demo, def gonna buy the full game. One thing though, the text explaining what a power does is overlapped with the name of the item. other than that, i aint found any other issues. Excited to play :) 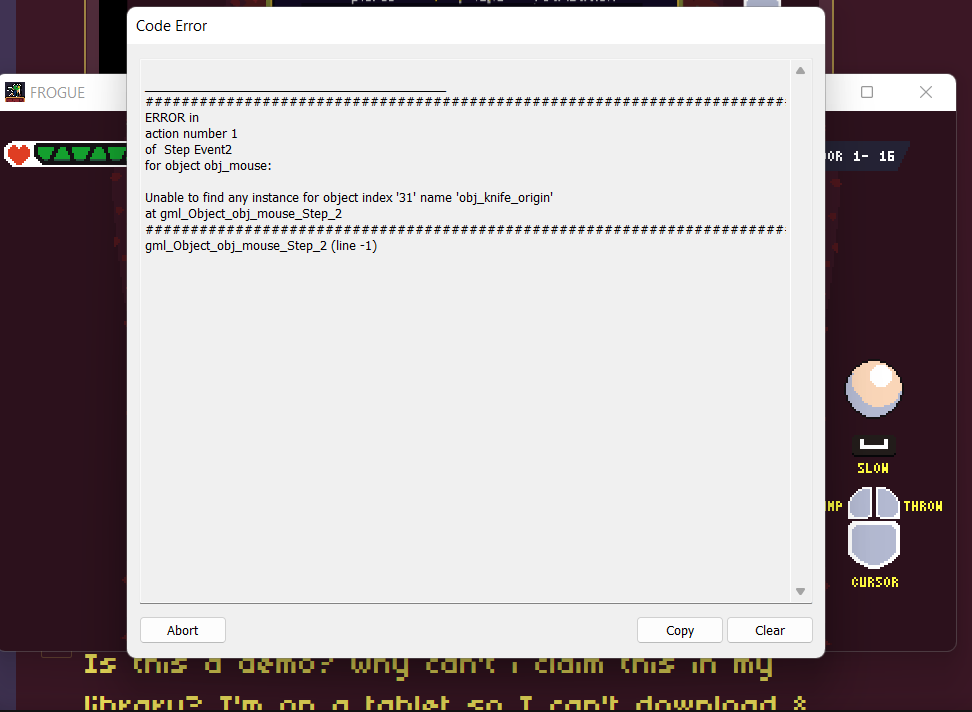 Is this a demo? Why can't i claim this in my library? I'm on a tablet so I can't download & play it. By the time I have access to a computer, I'll probably have already forgotten about this, which is a shame because I want to play it

This is so impressive

nice game. The plural of knife is knives.

this is very cool

Thanks! Working on the full version right now so make sure to wishlist on Steam!!!

Then we'd better buy it! I'm excited to see what more you do with it. The current version is already a blast!

See you on launch day my friend!! (Don't forget to wishlist it on Steam)

BUG: Please fix the settings menu, the spacebar doesn't work and browser version fullscreen mode is in the correct ratio...

Bug Report [Breaks Game] - On the browser version I right clicked (instead of spacebar) when selecting my upgrade "magnet knife." And the screen went black + I was unable to play

Reply
not Jacob209 days ago

I noticed that if you're fast enough, you can kill all the enemies in the endless arena before the next wave spawns. If you do, it opens a door to another endless arena.

Please fix that bug that appears when you jump in shielded penguin and when you attack it crashes the game (I mean there is no need to fix it but you can).

Right now I think the Steam (Demo) version is updated (don't forget to wishlist). I'm coming back to FROGUE development soon and I'm going to update it everywhere. Thanks!

please fix the boss bug because when i shot the final boss from an angel in to the corner with piercing, it went on infinitly and the boss won't die

why selected tile aim icon is behind enemies? it should be on the top layer

I found another bug. I was fighting the boss, and because I had the upgrade that increases the range that you can pick up the knife, I was able to just stand next to him and attack endlessly, killing him quickly. Unfortunately, this made him get stuck in an endless death animation, and I was unable to continue the game. Maybe if you made it so that the boss moved as soon as he got hit, it would stop that from happening? I'm not really sure what caused it, though.

This game is so much fun! I just have two suggestions.

It would be awesome to be able to watch the level at normal speed after you complete it, kinda like Superhot.

I'd like the endless arena more if it was just a bunch of levels with power-ups in between. Maybe make it one endless room after you get all the power-ups?

Thanks for playing, I'm happy you enjoyed.

Yeah, a lot of people request a replay scene, I'll probably put in in the final version.

The infinite Arena was something I put laSt minute before the jam ended, still thinking in how to put it in the final game.

Made an update to the game, made it more accessible. Let's see how it goes.

This is amazing I played for like 2 hours. Thank you for the game

Amazing game so much fun